Since launching in February, Paradox Politics has published a plethora of theory, commentary, and reporting. We’ve interviewed luminaries such as Noam Chomsky and Steven Pinker, scoured Pentagon reports on how the U.S. military will benefit from climate change, and analyzed the macroeconomic ramifications of El Salvador adopting Bitcoin.

This year, Paradox commissioned war correspondences from the frontlines of Afghanistan, compared Miami Beach to the Roman city of Baiae, and spoke with Harvard’s Astronomy Chair on how scientific groupthink kneecapped his research into aliens. Somehow, in between covering ideology and its labyrinths of contradictions, we formed a partnership with Striped Magazine to distribute Paradox articles to incarcerated inmates across the Northeast.

We are blessed and grateful every day for our readers, and those who believe in this new and unconventional media approach. To celebrate the past year, and get excited for the upcoming one, we’ve put together the ten most popular stories that ran on our site (calculated by total page views and time spent on each page).

There is hardly any difference in form between Congresswoman Alexandria Ocasio-Cortez staging a photo-op in front of a migrant detention center’s chain link fence during the Trump years, and Senator Ted Cruz romping through the jungle last week with a camera crew to film himself in front of migrant encampments. In both cases, an American politician is framed as the central character, while detention centers and the U.S.-Mexico border function primarily as backdrop settings in a staged production distributed through traditional and social media; migrants play the part of extras.

9. Why Florida’s Sinking Beaches and Scams are a Warning to America

Everything is a mirage in the everglades. Floridians know how to scam people and profit from crisis. We’ve been dealing with the environment’s  consequences for decades. Nobody should have ever lived in Florida: It sits in the center of a hurricane-hot zone, yet Floridians have grown up for decades in the state’s dangerous Fountain of Youth. Floridians can handle extreme weather, and we know when to sell. What will happen when global warming and con artists come for other state residents not accustomed to alligators swimming in their pools?

“First of all, he’s a cop. Then he did what he did,” Hannabal Shaddai, 48, who is currently serving a lifetime sentence at the maximum security level prison, told Paradox on a recorded phone call from the facility. “So it’s not safe for him to be here. Best case scenario for him is he’s going to get beat up a lot. I don’t think he’s safe in any prison population.”

“The dude is abnormal man, we make him out to be a monster. Just like when I went to trial, the victim’s family said I was a monster,” continued Shaddai. “But this is the thing, he didn’t get that way by himself if somebody put this racist stuff in him… We’re quick to call somebody a monster, but society creates the monster. Like me, I’m in here 27 years, trying to do better myself asking, ‘Why did I do these things?’ I’ve wanted to better myself.

In a reality where a teenager’s past remarks determine their future employment prospects and eligibility for a promotion, workers lose, unions are further reduced to shells of party politics, and preexisting power structures are reinforced with different ideological aesthetics. The rights of the very marginalized people Teen Vogue advocate for on a performative level are eroded, as the adherents of the ideology weaponize it against one another to limit individual success.

6. Artist Agnieszka Pilat Explains Why the 1% Will Own Reality

PARADOX POLITICS: Where do you see the art market going as more technology is introduced? Right now, it’s this frenzy with new forms of technology, but eventually this kind of stuff stabilizes and we’re left with this new reality before technology kind of up ends disrupting again.

The rich will still be able to have a real painting in their house and go to a real museum or travel to a real place. And I think the 99% of people are just going to have their VR goggles on, and they’ll live in their tiny apartment unhealthy, just experiencing everything visually, and have avatars of what they want to be; it’s going to be the story they tell themselves, and it’s very, very interesting. I think there’s going to be the ultimate great divide in the world, the real people, and the ones who are just living in the digital realm. That’s why the Matrix is so brilliant.

4. Afghanistan Frontlines: Inside China and Russia’s Geopolitical Mine Frenzy

The outside interest in Afghanistan mines comes as the Taliban undergoes a dire financial crisis, while also controlling for the first time in history the picturesque Panjshir province – the only parcel of Afghanistan they could not domineer during their last reign from 1996 to 2001.

“Half the wealth of Afghanistan is in Panjshir,” Haji Asad, a Taliban Commander stationed in the heart of Nuristan’s neighboring valley, boasts to Paradox. “And now we have it.”

Even well before the pandemic, Silicon Valley executives fetishized the concept of the “sharing economy,” wherein ownership becomes an obsolete concept as consumers increasingly rely on-demand services. Billionaire Bill Gates in 2018 wrote a blog post about how a large swath of the modern global economy was being powered by “intangible assets” like software (“something you can’t touch”). Yet over the past several years, Gates has acquired over 242,000 acres of farmland. There is a juxtaposition between what is being preached by those who created such abstract concepts as cloud computing, and the physical territories they are amassing with their capital.

Main Character Syndrome blurs further the distinction between an individual and the representation of an individual. An individual now perceives themselves as a third person video game character, operating within a capitalist realist matrix of brands and simulated experiences and its hyperreality of simulacra. The individual is left alienated from their peers, easier controlled by concentrated capital, no longer even owning one’s cognitive senses as their self-perspective only sees their representation. Main Character Syndrome is not a unique phenomenon in contemporary American culture, but it does follow four years of social activism predicated on group solidarity. Protests like the Women’s March and Black Lives Matter painted a multicultural mosaic of collectivism within the broader American culture, yet the post-Trump culture is one of total individualism: The culture which birthed Trump in the first place. 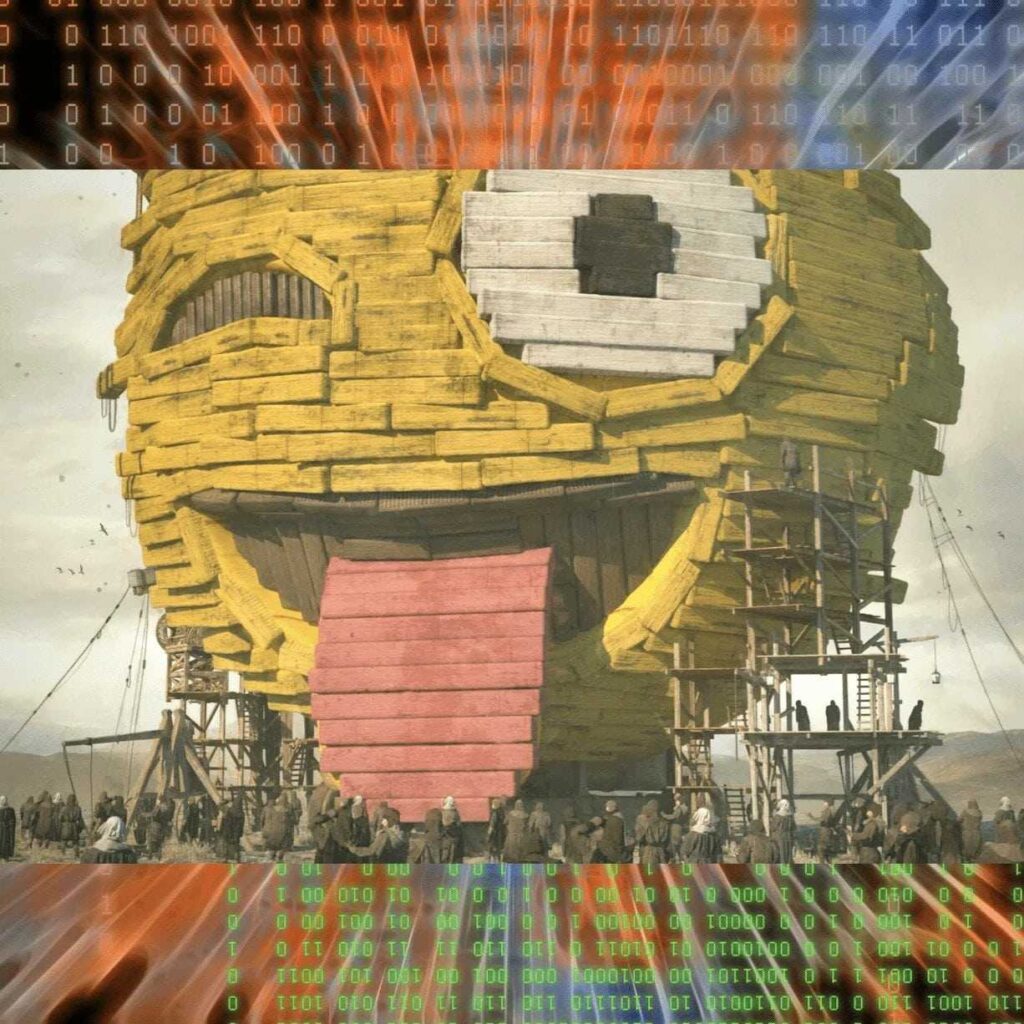 PARADOX POLITICS: Blockchain developers are working with a different worldview than founders like Mark Zuckerberg, which is that we have a lot of these problems in our society caused by the role of these centralized companies with data mining and the advertiser model. There does seem to be a worldview predicated on improving those models that people find unsavory.

JONATHAN BELLER: You can see the contradiction between centralization and decentralization in social media. Social media was sold and taken up because it promised to horizontalize communication. We wanted to overcome all sorts of barriers to publication, which were endemic to prior publishing architectures or network television architectures. We didn’t need gate keepers, editorial boards, the high-priced barriers to entry of cinema and television. The promise was communitarian communication along horizontal lines. But that decentralization of person-to-person channels, still was organized by central authorities and by privately owned fixed capital and in-fact become an engine for accumulation. People actually used this democratic surge to create very, very large individualized pockets of wealth. Democracy became an engine for hierarchy, the wealth that we created in taking and sending images to one another ended up in the pockets of billionaires. The decentralized promise was to make central banks and institutions of money obsolete and make money forms available for everyone. I think that possibility of “disintermediation” is still there; I think that’s a part of what crypto is. But the danger with NFTs is how they become a collectable through a fascist imaginary of mass-supported individual agency; it’s antithetical to democratization, even while it’s claiming democratization. Really, it’s about who creates the value (and values) and how that value is distributed. Think about the role of art. I get into this in my first book because its insights into the reorganization of society by screens stemmed from the role of revolutionary cinema where people were using aesthetic forms to transmit sensibility for a more just world against oppressive regimes. Art has a fundamental role to play in creating that aesthetic and affect as a tissue of relation and possibility. But when all that is put on the market for sale is subsumed by the same structure that captures all other forms of wealth, you have the effective liquidation of all of the effectiveness and knowledge that makes art what it is. And art comes to express only its price.