Teen Vogue during the Trump years promoted a cultural framework built on intersectionality and youth activism—many articles published on the site encouraged the use of advertiser boycotts as a tool of systemic change. But now the media brand is contending with its own advertiser boycott driven by Teen Vogue’s brand of progressive politics, as Ulta Beauty last week dropped a seven-figure deal with the publication.

Teen Vogue staffers weaponized decade-old tweets against their newest editor-in-chief, Alexi McCammond (a former Axios reporter who in 2019 was named by the National Association of Black Journalists as the emerging journalist of the year). As a teenager who had just entered college, McCammond derided a “stupid Asian T.A.” on Twitter, also writing that she was Googling “how to not wake up with swollen Asian eyes.”

The tweets resurfaced over the weekend after Diana Tsui, an editorial director at The Infatuation and a former editor at The Cut, questioned Condé Nast’s hiring decision on Instagram.

Although McCammond already apologized for these tweets in 2019, calling them “deeply insensitive,” twenty Teen Vogue staffers condemned the remarks ahead of her start at the publication. Celebrity Olivia Munn told media “there’s nothing excusable about” McCammond’s remarks as a college freshman. The scandal has been covered extensively by tier-one publications, including The New York Times, CNN, The Washington Post, CBS, and NBC. And now advertisers are fleeing.

There is a misconception that advertiser boycotts and similar activist tactics are designed to target large institutions. One of the main principles of leftist activism, which has since been adopted by Republican operatives and exists as a default characteristic of modern politics, involves attacking individuals as opposed to hierarchies. As Saul Alinsky popularized in his 1971 book “Rules for Radicals,” it is crucial for activists to choose a target that is “a personification, not something general and abstract such as a community’s segregated practices or a major corporation or City Hall.”

“Pick the target, freeze it, personalize it, and polarize it,” reads Alinsky thirteenth rule, citing labor organizer John L. Lewis’s effectiveness in attacking the General Motors president rather than the company itself.

Retrofitted for social media during the Trump years, Alinsky’s tactics have informed an entire generation of leftist activists weaponizing social media against their coworkers, high-school classmates, and professional rivals. With Trump out of office, the resulting culture reframed around Alinsky’s tactics, deployed in service against Trumpism and its enabling forces, remains in-tact—and is now being weaponized against individuals at the very institutions which helped mainstream this culture.

Teen Vogue is a media brand run mostly by millennials under thirty (the publication’s incoming editor-in-chief is 27, the current editor-in-chief Lindsay Peoples Wagner was 28 when she assumed the role, and the first Trump era editor-in-chief Elaine Welteroth was 29 at the time), operating under one of the largest privately held mass media companies which is the majority stakeholder in Reddit. During Welteroth’s tenure, the outlet began openly promoting an ideology best described as an Americanized interpretation of French poststructuralist theory (understanding hierarchies and capitalist structures exclusively as oppressive, their resulting inequalities based on race rather than class), built on philosophical theories from the 80s and 90s like “intersectionality” and “gender performativity.” It is no coincidence that the creator of the term “intersectionality,” Kimberlé Crenshaw, is featured in numerous Teen Vogue articles, and that Judith Butler (the philosopher who popularized the notion of “gender as a social construct”) praised Teen Vogue’s promotion of gender fluidity with The Cut (the same publication whose former editor Diana Tsui incited the outrage campaign over McCammond’s decade-old tweets). 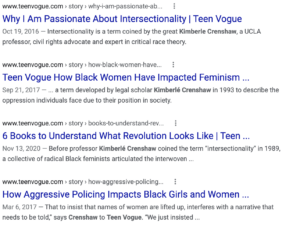 Republicans do not have a monopoly on the use of ideological pipelines connecting fringe theories to the corporate mainstream (such as Koch funded think-tanks and right-wing media outlets like The Daily Caller and Breitbart), nor are the tactics deployed in service to ideology exclusively governed by any one political party. The playbook deployed against Teen Vogue and Alexi McCammond is the same playbook used against Mapplethorpe: Pick the target, freeze it, personalize it, and polarize it. Instead of Republican congressmen, the inciting actors are twenty Teen Vogue staffers, several Hollywood celebrities, and a publicly-traded corporation (Ulta Beauty). Instead of gay artists, the target is a 27-year old woman of color.

In a reality where a teenager’s past remarks determine their future employment prospects and eligibility for a promotion, workers lose, unions are further reduced to shells of party politics, and preexisting power structures are reinforced with different ideological aesthetics. The rights of the very marginalized people Teen Vogue advocate for on a performative level are eroded, as the adherents of the ideology weaponize it against one another to limit individual success.

Even throughout its scandal, Teen Vogue has committed itself to promoting the ideology behind its lost advertiser revenue, publishing an article last week explaining the origins of the term “necropolitics,” which again promotes theorist Kimberlé Crenshaw.

“Abolition is the vehicle to create a new and better world, one brimming with life, not death. A world where all of us can survive the sinking raft,” writes the publication. “Instead of throwing anyone overboard, we ditch the unsustainable raft and help each other swim to shore.”

Great advice in theory, but hard to execute when bad faith actors continue dragging their fellow workers under.

UPDATE: Alexi McCammond announced she is resigning from Teen Vogue and will not be joining as editor-in-chief.