Coinbase CEO Brian Armstrong has fooled reporters and mainstream press with the cliché opener of any public relations offensive: Get ahead of the scandal.

Armstrong on Tuesday dumped allegations against the Securities and Exchange Commission (SEC) via Twitter, alleging the agency had threatened to sue Coinbase over the company’s rollout of its new lending service (LEND).

“We were planning to go live in a few weeks, so we reached out to the SEC to give them a friendly heads up and briefing… They responded by telling us this lend feature is a security,” tweeted the founder. “They refuse to tell us why they think it’s a security, and instead subpoena a bunch of records from us (we comply), demand testimony from our employees (we comply), and then tell us they will be suing us if we proceed to launch, with zero explanation as to why.”

1/ Some really sketchy behavior coming out of the SEC recently.
Story time…

Despite having a Forbes-estimated $10 billion plus net-worth, Armstrong has positioned himself as the underdog in a David v. Goliath clash with the United States government.

Skepticism is warranted toward this framing.

For starters, we have to take Armstrong at his word that this is an accurate representation of any discussions Coinbase has had with the SEC. There is a discrepancy between what Coinbase and its executives preach, and how they conduct business.

Although Coinbase is the largest cryptocurrency exchange in the U.S., its platform regularly crashes and prevents users from executing trades, especially during moments of market volatility when they often need to do so the most. These “glitches” are frequent, occurring multiple times per month. As recently as this week, as the price of cryptocurrencies dipped upon El Salvador’s botched rollout of Bitcoin as legal tender, Coinbase “experienced some service degradation” wherein users could not place trades. I myself experienced this firsthand when I tried to purchase a small amount of Yearn Finance on Tuesday. 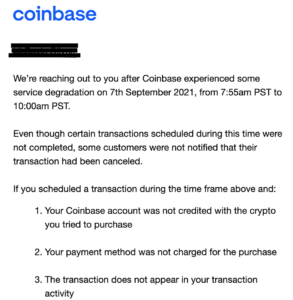 When RobinHood placed a freeze on trading Gamestop ($GME) and other meme stocks in January, it was a week-long news cycle. There was a Congressional hearing wherein RobinHood’s CEO had to virtually testify before lawmakers and explain why his company’s decision to halt trades did not constitute market manipulation. When Coinbase prevents users from executing trades, there is no mention from mainstream outlets—the attitude is generally a shrug and chalking cryptocurrency up as an emerging asset class.

Glitches happen on any technology platform, but the regularity they happen on Coinbase is alarming, especially for a publicly traded company. The company does not provide proper transparency for why its platform is rendered unusable so frequently, especially at crucial investing moments, and acts with a sense of entitlement toward its users. Coinbase’s repeated exchange outages, and lack of explanation or accountability, could be enough to warrant regulatory action.

Armstrong’s tweets toward the SEC reflect this entitlement. The founder accuses the regulatory body of acting “really sketchy,” and says Coinbase gave the SEC “a friendly heads up and briefing” before rolling out a cryptocurrency lending service that will affect millions of retail investors, like a spoiled teenager telling a parent he will be home past midnight. Lending services are one of the most controversial areas in cryptocurrency from a regulatory standpoint because they could constitute illegal lending if provided to dangerous actors. Over the past year, third party cryptocurrency lending services have come under increasing scrutiny, including the company BlockFi which is currently under investigation by five state governments.

Third party cryptocurrency lenders often do not provide transparency with how their interest rates are calculated, and money invested through these companies could go into any number of internal functions like marketing. It is wishful thinking assuming that new cryptocurrency interest payments magically deposited into a user’s account through some hidden conversion process would not qualify as securities, especially when cryptocurrencies themselves are considered securities.

As Amy Lynch, a former regulator and President of Frontline Compliance, told MarketWatch, a factor into a possible lawsuit against Coinbase over lending could stem from the company not structuring this service correctly. Lynch notes that companies offering crypto lending services typically register with the SEC or go through a broker to comply with regulators. Gemini, for instance, partners with the crypto lender Genesis, a subsidiary of Digital Currency Group, to ensure it is abiding by best practices. In this case, Gemini collects part of the spread between interest paid on the crypto and interest Genesis charges on its loans to institutions.

Perhaps Coinbase does not want to split its profits from lending with a partner, or is looking to speed rush this process (offering its compulsory “heads up” as the bare minimum requirement), in which case Armstrong’s criticism toward the SEC comes from a place of greed and not wanting to err on the side of caution.

Coinbase makes money by siphoning decentralized cryptocurrencies into its own centralized corporate infrastructure, charging fees on every transaction for retail investors (a practice both Fidelity and Morgan Stanley discontinued), while avoiding having to answer for frequent outages. It is true that what regulators decide with bigger players will eventually set the standards of the industry, but Coinbase is not a helpless victim and should be treated by the SEC like what it is: a publicly traded corporation.

ABOUT US
Paradox Politics studies the ideological foundations governing our current reality. In a simulated world where truth has been replaced by narratives, Paradox examines the cause of appearances and encourages readers to adopt new ways of thinking rooted in skepticism, historical parallels, and philosophy.